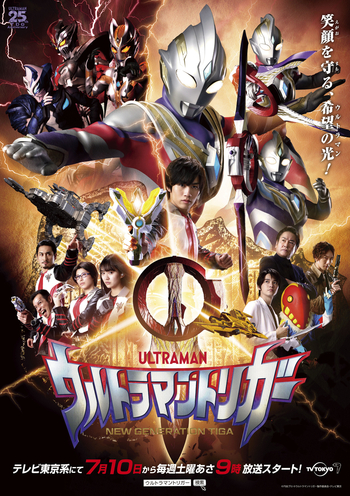 The Ultra Ancient Light connects to the current generation of legendary giant.

"Build the future, the light of Hope! Ultraman Trigger!!"

Ultraman Trigger: New Generation Tiga, or simply Ultraman Trigger, is a Toku series released on July 9, 2021, created by Tsuburaya Productions and the 33rd entry in the Ultra Series.

30 million years prior, a giant of light sealed a great darkness away and went into slumber on Mars. In the present day, Martian settlement resident Kengo Manaka heads out to his work as a botanist. Unfortunately his peaceful life is disturbed by a monster attack at the same time when the sealed darkness starts to move and evils of the past return. Kengo has a fated encounter the giant of light from the past, whose name is revealed to be Ultraman Trigger and becomes the user of the ancient giant of light's power.

This series celebrated the 25th anniversary of Ultraman Tiga, hence the titular hero's many similarities to the original Tiga as an alternate retelling of the former series intended for the current generation of audience. While Trigger is not set in the same "Neo Frontier" continuity as Tiga or its Sequel Series Dyna, the show has hinted that there is a direct connection between the two series.

Just like the previous two series, it is accompanied by a Voice Drama released on the Tsuburaya YouTube channel, but since the titular Ultra's own past is already being covered in the series itself. It instead focuses on the lives of Ultraman Ribut and Sora after joining the Galaxy Rescue Force in Ultra Galaxy Fight: The Absolute Conspiracy Chapter 1: The Beginning.

The series is followed up in a theatrical film, Ultraman Trigger: New Generation Tiga: The Movie: Episode Z, serving as an epilogue to the series, and an upcoming Sequel Series set in the same continuity as Trigger called Ultraman Decker.