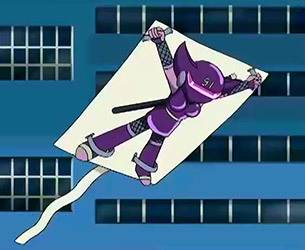 When I said, "Go fly a kite," this isn't what I had in mind.
Advertisement:

Flight is cool. Kites are cool. So it stands to reason that flying on kites would be even cooler. This trope is when flight is provided by riding a giant kite.

While the trope is usually seen as used by ninjas, that doesn't limit examples to just when it's used by them.

Subtrope of Flight. Related to Rule of Cool. Not to be confused with kiting.