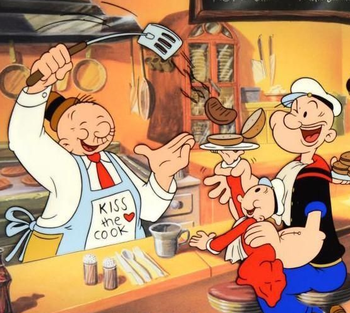 It's the neighborhood barbecue party. Everyone's having a good time, and at the center of it is the dad hosting everything, standing in front of a grill, cooking up hamburgers and hot dogs for eager guests. To complete the lighthearted and carefree atmosphere of the day, he wears an apron reading "Kiss the Cook" or "Kiss the Chef" as the ultimate sign of how relaxed and inviting he is.

The phrase is thought to originate from 1800s Italy, where giving a kiss to the cook was a sign of satisfaction with your meal. The phrase seemingly made the jump to apparel, most commonly aprons, in the 1950s, and is popular among cooks and chefs of all ages and genders even today.

With the design appearing so often in popular culture, media, and Real Life, it has evolved into Stock Parody, and is frequently spoofed and parodied.

Patchy wears a "Kiss the Cook" apron while working at a burger joint, just so the ladies know he's single.

Patchy wears a "Kiss the Cook" apron while working at a burger joint, just so the ladies know he's single.