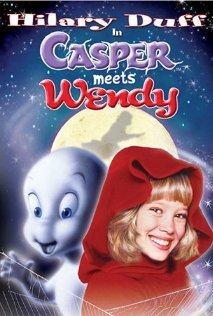 Casper Meets Wendy is a Direct to Video film released on September 22, 1998. The film is a sequel to Casper: A Spirited Beginning and the second Broad Strokes prequel to the 1995 Casper; this film and A Spirited Beginning were produced by Saban Entertainment and released by 20th Century Fox. This was the first major film for Hilary Duff, who was nearly 11 years old when this film was released.

After drawing the ire of a nefarious warlock named Desmond Spellman (George Hamilton), Wendy the Good Little Witch and her aunts seek sanctuary in a resort in order to stay off the radar. There, Wendy meets Casper the Friendly Ghost, who is vacationing with his quarrelsome uncles. Despite their families' prejudiced warnings, Wendy and Casper become fast friends. Before long, this high-spirited duo decides to team up to take down the bullying warlock.