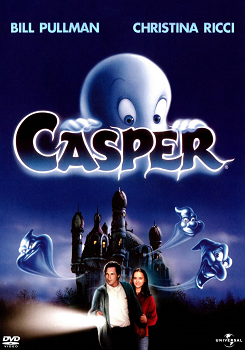 Get an afterlife!
Live-Action Adaptation from The '90s of the Casper the Friendly Ghost cartoons and comics. Directed by Brad Silberling (who went on to do the A Series of Unfortunate Events film) and produced by (who else?) Steven Spielberg. The first feature film ever to have a CGI character in the lead role, beating Toy Story by six months.
Advertisement:

Carrigan Crittenden (Cathy Moriarty) is eager to get her claws on her dear departed dad's fortune, but discovers at the reading of his will that he... didn't like her very much and only left her a moldy old mansion. Upon learning that the house may contain treasure, she drags her long-suffering lawyer Dibs (Eric Idle) to the Maine coastline, where they find the building is haunted by Casper and his three uncles. Carrigan eventually hires "ghost therapist" Dr. James Harvey (Bill Pullman) to get rid of them. He brings along his daughter Kat (a teenage Christina Ricci fresh off the Addams Family films), whose relationship with Casper is most of the plot.

The film wasn't well received by critics (Roger Ebert being a notable exception) and did even worse with Al Harvey's children. Nevertheless, it was commercially successful ($288 million worldwide from a $55 million budget) and gained a bit of a cult following.

It gained a few DTV sequels, two live action and two CGI animated. However, save Casper's Uncles, they don't share any continuity with each other. These sequels are often considered to be of much lower quality than the original.

The film was additionally the basis for the short-lived animated series The Spooktacular New Adventures of Casper and received a licensed video game adaptation.

Casper has no memories of his life.

Casper has no memories of his life.