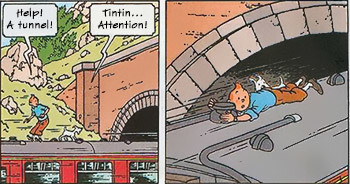 Bond: By the way, how tall are you?
Henchman: Six-two, why?
(Henchman is clipped from behind by a bar reading CLEARANCE 6')
— James Bond "Licence to Thrill" Action Ride
Advertisement:

In situations involving fast-moving vehicles or animals (such as a Traintop Battle), watch out for low bridges, tunnels, light fixtures, and branches. In cartoons and comedies, it's for laughs as characters get knocked off with some bruises; elsewhere, it can be rather gruesome to the point of decapitation.

Alternatively, characters will duck, jump off, or move to an awkward position to avoid getting hit. Bonus points if somebody says, "Low bridge!" during such.

This trope is not limited to vertical examples. Also included are situations where tall characters knock their heads while walking through a door frame.

In pursuit situations, especially with aircraft, skilled pilots can demonstrate their skills by maneuvering through a narrow area, such as during an Aerial Canyon Chase, and their opponents breaking their wings before crashing.

Instant Convertible is a Sub-Trope, where the character's car is the victim. Compare Watch Out for That Tree!, Toyota Tripwire, and Belly-Scraping Flight.

Subversion. Arthur speeds through a low tunnel believing Lewis won't be able to follow, only for him to ghost the truck right on through.

Subversion. Arthur speeds through a low tunnel believing Lewis won't be able to follow, only for him to ghost the truck right on through.