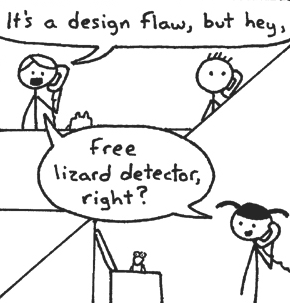 One character starts saying something, and while completing the sentence, another character (or several) join in.

Alice: I just know this is going to be—
Alice, Bob, Carol, Steve, and Zoidberg: The Best Trope Ever.

May be done sarcastically (the first character says X so often that everyone can tell what's coming), or as a sign of group solidarity (especially common with the Catchphrase). This also often happens with Eureka Moments that involve two or more characters of a similarly high intellectual level. It's played for comedy if the characters aren't really that smart, or they're coming to same ridiculously outlandish Insane Troll Logic conclusion by complete coincidence.

Gags aplenty exist for this one — the people say different things, or there's an Expo Speak Gag or something. Or one of the characters yells "Jinx!" There's also usually also a coda, because you can't let something like that go.

This is also very common with shows shot before a studio audience; the audience chime-in is usually done out of enjoyment and pleasure of being familiar with the character's Catchphrase or Verbal Tic.

Closely related to Finishing Each Other's Sentences. Could be related to Are You Pondering What I'm Pondering?. See also Speak in Unison, for when characters do more than just finish the thought at the same time.