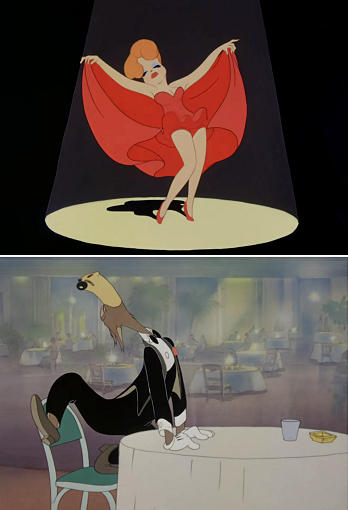 "As I got out of the car arriving I got the most gorgeous wolf whistle from somebody, and I thought, 'Huh! This is going to be alright!'"
— WAAF Mary "Bubbles" Moore, Death by Moonlight.
Advertisement:

Let a hot, sexy woman stroll through a crowd of males and one or more of them will emit this classic sound, guaranteed. (It's most accurately transcribed as "Wheet-WHOO!", although a simple "Whoooo!" might also suffice.) The Wolf Whistle is a staple of old films and cartoons of the '30s and '40s, most notably the works of Tex Avery. The Wolf would acknowledge the presence of Red with this whistle.

It should be noted that the Wolf Whistle isn't restricted to men. On occasion women will use it to express approval of the new stud in the environment.

This was noted the most common Wolf Whistle, usually approval of thought to find a person sexily attractive. A slightly different version of the Wolf Whistle involves a single, lower-pitched elongated tone, usually while the character stares at the person/object in question. It's more commonly used today than the classic whistle.

Variations include the "wolf howl", the "purr", the "growl", and the "dog pant". Note that carnivorous mammals always seem to be referenced.

May also have the whistler become an actual wolf, or have a wolf head. Not to be confused with a wolf fifth.

Related to Construction Catcalls, with the difference that this trope is always used for comedy, never for drama except as an intentional subervsion, due to the Grandfather Clause induced by the Tex Avery cartoons that made the Wolf Whistle way too characteristic of parodic cartoons to be taken seriously as anything else.