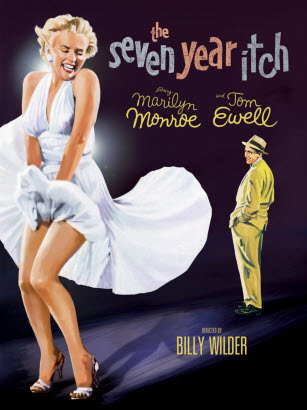 "Isn't it delicious?"
"When something itches, my dear sir, the natural tendency is to scratch."
Advertisement:

The Seven Year Itch is a 1955 Billy Wilder-directed film that arguably marked the high point of Marilyn Monroe's popularity—and a fair contender for the title of the most famous American film you've probably never seen.

Richard Sherman (Tom Ewell) is a middle-aged book publisher who lives with his wife and young son in a large apartment in the Gramercy Park neighborhood of New York City. It gets so hot one summer that the wife and kid decide to take a vacation up to Maine, with Richard staying behind to hold down the fort and win the bread.

Richard has been having disagreements with his wife lately, and feels repressed. Even so, he agrees (at first) not to smoke, drink alcohol, or eat meat for the duration of his time alone. But one evening, as he is returning home from dinner at a vegetarian restaurant, he slips on one of his son's roller skates and hits his head. Enter a blonde and curvy girl (guess who), who just happens to start living in the apartment above Richard's. Hilarity Ensues.

Based on George Axelrod's 1952 stage comedy of the same name, in which Ewell also appeared... and which included an actual extramarital affair between Richard Sherman and The Girl, which was censored out of the film version.

Also is famous for popularizing the Marilyn Maneuver, which is discussed in more detail below.