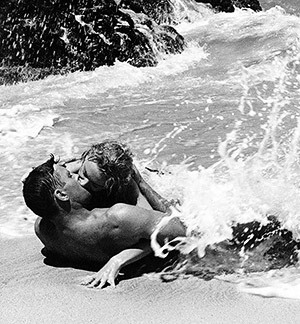 "Sex on the beach
We don't mind sand in our stilettos"
— Katy Perry, California Gurls
Advertisement:

When a man loves a woman, one way they'll show their love is an intimate, passionate kiss on a beach, often with ocean waves splashing over them. Often done in homage or parody of From Here to Eternity's Signature Scene, which is the Trope Codifier.

Usually a subtrope of The Big Damn Kiss. Not to be confused with kissing the beach; that'd be Kissing the Ground.