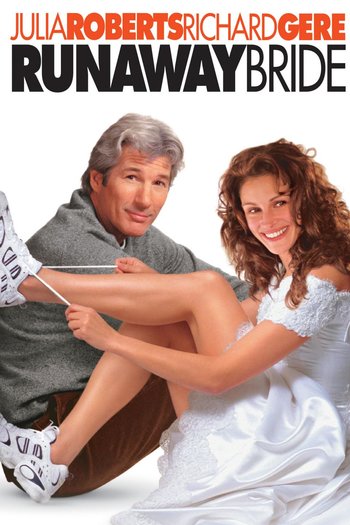 The plot is relatively simple: Maggie Carpenter (Roberts) is a young woman with a fear of commitment. Besides a string of abandoned boyfriends, she has left three would-be husbands at the altar. Her case has attracted enough press attention to interest the resident Intrepid Reporter.

Said reporter is Ike Graham (Gere), recently unemployed after writing a libelous article about Miss Carpenter. Realizing the story was full of factual errors and Malicious Slander provided by the men whose heart Carpenter has broken, Graham decides to find the Runaway Bride and find the truth behind her story.

He finds her preparing for her fourth potential marriage. At first, Ike decides to help Maggie face her fears. However, the two start becoming attracted to each other. Bob Kelly (Christopher Meloni), her current fiancé, doesn't particularly appreciate that kind of help.