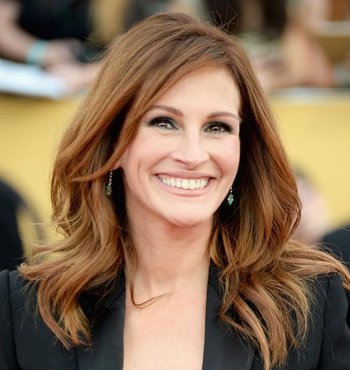 Julia Fiona Roberts (born October 28, 1967 in Smyrna, Georgia) is an American actress. She became well known during the early 1990s after starring in the romantic comedy Pretty Woman opposite Richard Gere, which grossed $463 million worldwide. After receiving Academy Award nominations for Steel Magnolias in 1990 and Pretty Woman in 1991, she snagged a Best Actress Oscar in 2001 for her performance in Erin Brockovich. Her films, which run the gamut from romantic comedies to crime thrillers to straight dramas, have collectively brought box office receipts of over $2.6 billion, making her the most successful actress in terms of box office receipts.

Also well-known for her megawatt toothy grin and her love for going barefoot.

She's the younger sister of actor Eric Roberts and the aunt of actress Emma Roberts.