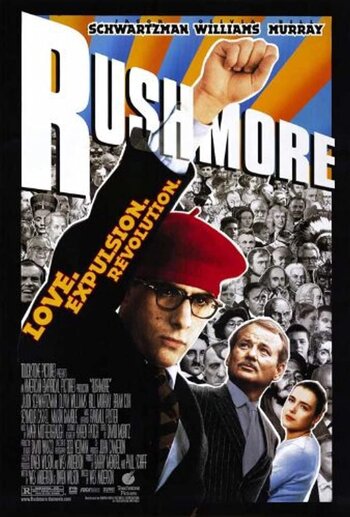 Rushmore is a 1998 film by Wes Anderson, starring Jason Schwartzman, Bill Murray, and Olivia Williams. It follows the exploits of Max Fischer, 15-year-old student at the eponymous academy. He is incredibly bright but scatterbrained, preferring to do extracurricular activities instead of actual schoolwork. He becomes unlikely friends with Herman Blume, a local businessman who is unhappy with his life and becomes inspired by Max's energy.

When a new teacher arrives at Rushmore Academy, Rosemary Cross, an odd Love Triangle develops, with Max hopelessly lusting after Rosemary while she and Herman begin having an affair. The two friends soon become bitter enemies, working to ruin each other's lives. However, since this is a comedy, and not a particularly dark one, the tone remains lighthearted and whimsical throughout.

The movie has a childlike sense of awe and general quirky atmosphere, which went on to become Wes Anderson's signature style. It also allowed Bill Murray to establish himself as a dramatic actor, and he would continue to work with Anderson in his major films to this day.