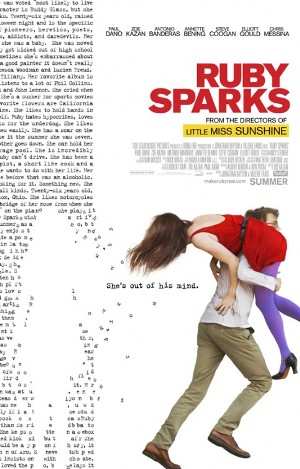 Readers are going to be very confused by that woman-shaped hole in the page.
"She's out of his mind."
Advertisement:

Calvin (Paul Dano) was once a Teen Genius author; 10 years later, he has serious cases of depression and Writer's Block. His only inspiration is Ruby Sparks, the Manic Pixie Dream Girl of his (literal) dreams. After writing a doorstopper Self-Insert Fic about her, he wakes up one morning to find Ruby (Kazan) in his kitchen.

Kazan wrote the screenplay for herself and her boyfriend, playing respectively a fictional character made real and the author who created her. Very meta.