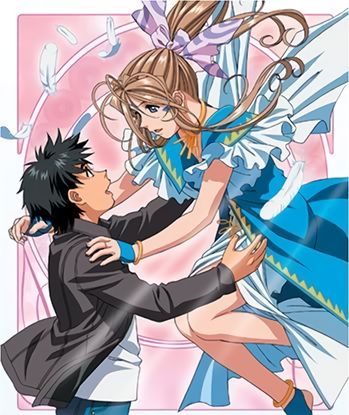 The touching story of a boy and his Physical Goddess girlfriend.
"She's the heart of the funfair
She's got me whistling her private tune
And it all begins where it ends
And she's all mine, my magic friend
She says: 'Hello, you fool, I love you
Come on join the joyride.'"
— Roxette, "Joyride"
Advertisement:

A genre of adolescent male Wish-Fulfillment.

The hero is usually a geeky loser, terribly unlucky at love. He is either unable to get a date at all, or has had his sensitive poet's heart broken by a cruel bitch who was only toying with his affections, forcing him to withdraw from all feminine companionship. Exactly how strongly this is exaggerated depends on the writers.

However, because he is a genuinely good and kind person, fate smiles upon him — the perfect girl for him enters his life. She is beautiful, kind, domestic, and utterly and eternally devoted to him. However, she's often not exactly human by most definitions — she is a goddess, demon, vampire, witch, extraterrestrial, angel, robot, ghost, virtual being born of an advanced computer program, or under a spell/curse, or an immortal sorceress, or some combination of any or all of the above. Sometimes the "magic" is purely metaphorical, although this is usually used in a critical way implying she's too good to be true. But she is good — to him and for him — and if the plot would just leave them alone they'd be very happy together.

But no relationship is ever perfect, and a pairing of dork and demigoddess is inevitably going to go awry in the most embarrassing way possible. Despite this and his initial misgivings, however, true love blossoms for the once-hapless hero — largely because his Magical Girlfriend is determined that it should.

Entries in this genre often come packed with generous quantities of Fanservice, but this is by no means mandatory. Sometimes it overlaps with Unwanted Harem, but requires more Willing Suspension of Disbelief, since her popularity is obvious.

In dramatic examples, Magical Girlfriends are ironic blessings. No matter how much she insists, she will tend to give the guy an inferiority complex about himself and being unworthy. Conversely, Magical Girlfriends often feel they cause more problems than they solve, and the guy is just putting up with them due to niceness. Of course, her family almost always gets involved; and rest assured they will get in the way as much as possible.

If the relationship actually works, it may become an Interspecies Romance (assuming she does not become fully human, which sometimes happens).

Magical Girlfriend series show up in shōnen, but seem to skyrocket in popularity within the seinen crowd. There are a couple of Shōjo series too, one being Yuu Watase's Gender Flipped Magical Boyfriend series Absolute Boyfriend, another being Naoko Takeuchi's Orphaned Series Toki Meca, which replaces the couple with a Pseudo-Romantic Friendship. As the Films — Live Action folder below will attest, it's had peaks and valleys of popularity in the West as well, particularly in The '80s.

Just as the Magical Girls genre was inspired by Bewitched, it seems likely that both that show and I Dream of Jeannie are somewhere in the DNA of the Magical Girlfriend.

Sub-Trope of Muggle–Mage Romance. The Magical Girlfriend might be a Magical Girl, but the tropes shouldn't be confused. Compare and contrast with Manic Pixie Dream Girl. See Well, Excuse Me, Princess! for when the Magical Girlfriend wakes up to how much of a geeky loser her love interest is and begins calling him on it, and Action Girlfriend if she's more action-oriented than magical. May overlap with Boy Meets Ghoul. See also Divine Date.

If you fancy writing one of your own, here's a guide to help you out.