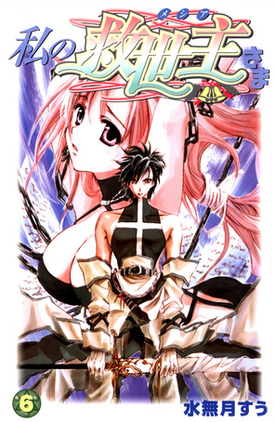 Shinya Yumiki is your average schoolboy, who is rather plain and gets bullied a lot. He has a close friend, Ryohei Sakakiyama, the son of a local hospital's doctor who stands for Shinya and is more than happy to defend him. Nonetheless, Ryohei can't be there all the time, so Shinya still gets his own (un)healthy dose of bullying either way.

One day however, all that changes when a girl named Haruna suddenly appears on Shinya's life, proclaiming that the young man is The Messiah who will bring salvation to Celestia, her homeworld. Thus, Shinya's tale of adventure, betrayal, and salvation begins.

Watashi no Messiah-sama is a manga series which ran from 2002 to 2007 in the Monthly Gangan Wing magazine, later collected into 12 bound volumes. It was written by Suu Minazuki, the author who would later go on to write Heaven's Lost Property.

Watashi no Messiah-Sama contains examples of the following tropes: