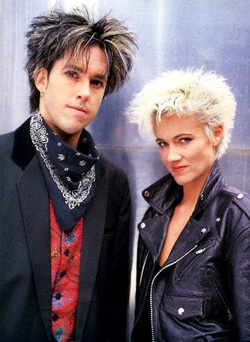 Once an eighties duo, always an 80's duo.
"Their style is so adorably dinky, with rinky-tink rhythms, toy power chords, and teensy vocals, that you practically want to pet it. And the affection, apparently, is mutual."
—Entertainment Weekly review
Advertisement:

Roxette was a Swedish soft rock duo consisting of Per Gessle (guitars, vocals, main songwriter) and Marie Fredriksson (lead vocals, 1958-2019). They were the second most successful pop group to come out of Sweden, and considering who's first, that's no mean feat. Their height of popularity was from the late eighties into the mid nineties, mainly because that's when their American popularity faded and they went their separate ways. After a difficult period in the late aughts when Marie struggled with cancer, they announced their reunion and began a European comeback tour.

Already successful in their homeland, their international breakout came when the song "It Must Have Been Love" was included on the soundtrack of the film Pretty Woman and the highly successful single "The Look" was introduced on American radio by a Minneapolis DJ who was given a copy of the song by a student who bought the record while studying abroad in Sweden. The duo subsequently gained nineteen UK Top 40 hits, and four US number one singles. They continue to be popular in Europe and Latin America, whereas they'll always be remembered in the U.S. as being strictly an eighties band.

In 2002, the duo took a break from recording and touring when Fredriksson was diagnosed with a brain tumor. Gessle went on to release solo albums before Roxette took to the stage together again for the first time in eight years in 2009. They released three more albums in 2011, 2012 and 2016. Although the duo planned to release more studio material afterwards, Fredriksson's ill health proved too much of an obstacle, and her death on 9 December 2019 ended the possibility of any further Roxette work.