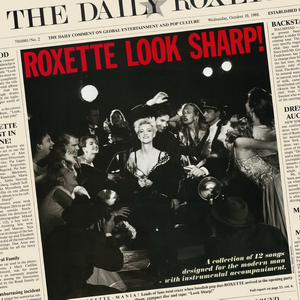 Heavenly bound
'Cause heaven's got a number
When she's spinnin' me around
Kissin' is a colour
Her lovin' is a wild dog
She's got the look
—"The Look"
Advertisement:

Look Sharp! is the second studio album recorded by Swedish pop duo Roxette. It was released through EMI on 21 October 1988.

For this album, EMI and bandmate Per Gessle decided to place the focus on Marie Fredriksson. This would color the performance of the album.

While critics liked the singles, they felt the rest of the tracks were nowhere near as strong. But a chance purchase would take the band a completely different direction.

An American exchange student that liked the band purchased a couple copies of the album, and brought it home to Minneapolis. He gave one to a local Top 40 station, who started playing its fourth single, "The Look".

It proved popular enough to enter the top half of the Billboard Hot 100 with zero official promotion.

"The Look" would eventually hit #1. Despite American critics seeing it as "disposable", the public loved it. In their native Sweden, Look Sharp! would go six-times Platinum. They raked up a ton of Platinum records all over Europe, and ultimately went Platinum in both the United States and United Kingdom.

The album was remastered in 2009, and re-issued again for its 30th anniversary in 2018. The 2009 re-issue included three bonus tracks on its physical CD, and five more digital-only tracks. The 30th anniversary re-issue further added a bonus disc with demos.

Not to be confused with the 1979 debut album of the same title (including exclamation point!) by British singer-songwriter Joe Jackson.

"Hold on tight, these tropes are a little bit dangerous:"