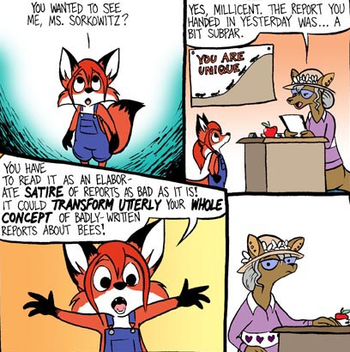 "The most perfidious way of harming a cause consists of defending it deliberately with faulty arguments."
— Friedrich Nietzsche, The Gay Science
Advertisement:

Parodies that pretend to be serious works, no matter how absurd or mocking their contents are, often with the purpose of getting Misaimed Fandom to generate hilarious feedback. The Internet Age has made it particularly easy to do this. You can never be sure the person on the other computer isn't that obtuse. In the more general sense, standard internet discourse in highly exclusive internet forums can be very difficult to decipher by outsiders; stealth parody submitted to such communities is commonly known as "trolling".

It can be lots of fun to find a particularly awful piece of Fan Fiction and review it as if it is one of these. Sometimes it actually is, and sometimes an author may claim that it is later. Being "stealthy", it can be hard to tell.

Sometimes overlaps with "Poe's Law", but Poe's Law is applied specifically when a parody of anything extreme is mistakenly taken at face value, or the opposite: an over-the-top work that is intended to be serious is confused with a parody. It also sometimes overlaps with Spoofed with Their Own Words.

Compare Indecisive Parody, which is when someone involved in an otherwise-serious project mocks it. See also Parody Retcon, when a creator tries to claim that a badly-received work was one of these.

Be careful when adding entries to this list. A badly done Stealth Parody is still bad, unless it's a stealth parody of stealth parodies. Eat your heart out, Poe.