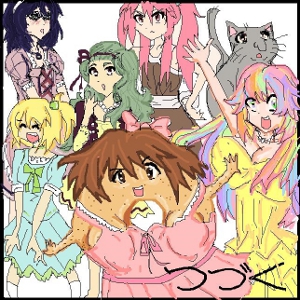 Large Bagel is a Webcomic and fanime by Nyan-chan.

Both stories follow Pinisu-chan, a human sized anthropomorphic bagel, and her human friends as they protect the world from a vaguely defined threat using their vaguely defined magical girl abilities. Along the way, they tackle with everyday issues that teenagers face in their home country of Glorious Nippon.

Similar to Neko Sugar Girls, only a bit more coherent, better drawn, and more self aware.

The webcomic can be found here

while episodes of the fanime can be found here.

Tropes which Large Bagel provides an example of: