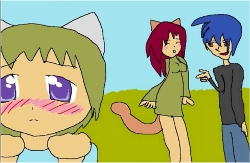 From Left to Right: Raku-chan, Koneko-chan and Hitoshi-san
This has transcended being terrible to﻿ the point where it's become intensely fascinating and engrossing.
-Youtube comment on the first episode

Nyan~ Neko Sugar Girls is a YouTube-hosted Fanime series, which has gained a certain amount of infamy in some circles just for existing. The show chronicles the lives of Cat Girl Raku-chan, her best friend Koneko-chan, and the object of her desire, the blue-haired Hitoshi-san. Animated in MS Paint and supposedly voice acted by Japanese forum members, it's a confusing mishmash of Japanese Media Tropes and Gratuitous Japanese. Most episodes are but a few minutes long (including the theme songs), leaving little room for Plot or Character Development.

By around the third episode (and earlier, if you check the tags in the first video) it becomes apparent that Nyan~ Neko Sugar Girls is probably a Stealth Parody of Western Otaku culture, and many viewers consider the creators to be Trolls of Tara Gilesbie proportions. However, the creators do have a trove of concept art and character designs that implies that this was a sincere project at some point in its inception.

was released on the official channel featuring the characters in an informational PSA on staying safe during the 2020 COVID-19 outbreak, with all of the original cast reprising their roles. Although the animation quality is very much updated and improved with new modern software, the shitty art quality and awful voice acting are pretty much exactly as they left it in 2012.

, and several episodes have also been uploaded to Nico Nico Douga for added MSTing fun. If you don't feel like you can face it alone, there is a "Let's Watch!" of the series here

. The creator has a DeviantArt here.

Tropes that Nyan~ Neko Sugar Girls provides an example of: