Jizzed in My Pants 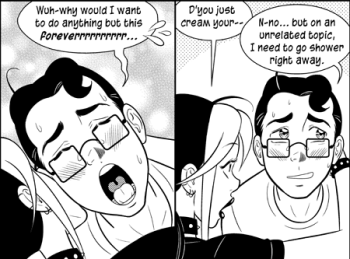 Bob, being the loser virgin or horndog he is, is... easily overstimulated— so much so that he ejaculates in his pants without even having sex, or in extreme cases, just from Alice talking to or brushing up against him. If he's in public, expect Hilarity to Ensue. If he's in private, expect Alice to be either extremely disappointed in Bob or proud of herself, depending on whether or not it was her intention.

In anime, a similar situation usually causes an explosive Nosebleed. Compare to Raging Stiffie. Contrast with The Loins Sleep Tonight. The end result of a Nocturnal Emission. Can be the cause of some of the Embarrassing Damp Sheets. A man ejaculating too quickly while making love is Speed Sex. Often combined with The Grunting Orgasm. If he peed his pants instead, that is a Potty Failure.