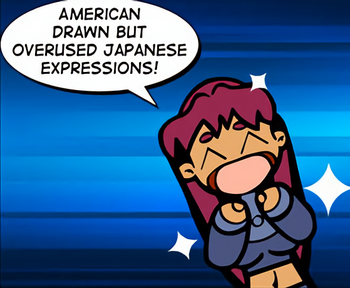 Seto Kaiba: Avatar isn't anime!
Gansley: It might as well be.
— Yu-Gi-Oh! The Abridged Series, Episode 47

Things that are done in an art style similar to, or use tropes associated with, Japanese anime. Also called anime-influenced animation, Amerime or Americanime (if it's American), Franime (for French things), or faux-anime, animesque works come from a variety of sources. Some are simply non-Japanese creators deciding to mimic the style, while others are genuine co-productions. France and Canada are especially known for cooperating with Japanese producers in this way. In Japan itself, "anime" is a broad term for anything animated (being shorthand for the loanword "animation"), so technically, all of these examples are "anime" whether or not they are classic Japanese-style anime.

Animesque art is a case of a 'full-circle' evolution, because the Japanese anime style was inspired by classical American theatrical animation of the 1930s and 1940s. For example, the big eyes of anime characters were taken straight from such works as Bambi and the old Fleischer shorts — think Betty Boop.

This style was pretty prevalent in the early 2000s due to the rise of the anime boom in media with many following the trend. Nowadays not so much now that anime is pretty commonplace, though still a design choice for some.

Note that this is about a work's art style, not its storytelling.

Several Japanese series have inverted this trope by going for a western look. Since American cartoons generally require several times the production money for their higher frame rates, there are limiting factors that keep it to surface aesthetics rather than the actual motion. The limits are easier to get around in comics and video games. If they use English, expect it to be about as good as our Japanese. Also Inverted by Japanese video games in their art style and other choices. Outside the country, some like to call them "Japanese Animation" or "Japanese Comics" to differentiate series with no "anime" traits.
General
Anime & Manga
Video Games
Visual Novels
Web Animation
Feedback