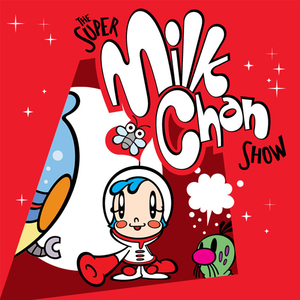 "Wholesome? Probably not. Good for you? Definitely."
Advertisement:

Super Milk Chan is an anime comedy about a foul-mouthed 5-year-old girl named Milk P. Chan, who has been entrusted by the President of Everything to defend the world, despite the debatable presence of any actual superpowers beyond her ability to make pop culture references. In each episode, the President ("of Everything", according to his name) calls with a new mission; whether Milk actually takes the mission is not guaranteed. Regardless of whether or not she takes the mission, she always takes credit and celebrates her success by going out for "sushi (or something)." Likewise, there are a number of other constants that follow through the series, often under contrived circumstances.

Super Milk Chan began as eight-minute segments (14 segment episodes) on the Fuji Television program Flyer in 1998, followed by a half-hour program, Oh! Super Milk-Chan, in 2000. Across the Pacific, the show ran on Adult Swim between 2004 and 2005 in the US, and on Locomotion around the same time in Latin American satellite TV.