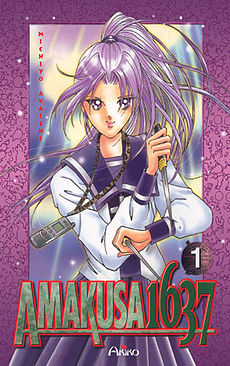 Amakusa 1637 is a 12-volume josei manga by Michiyo Akaishi, serialized from 2000 to 2006 in Shogakukan's Flowers magazine. It follows the adventures of six Japanese teenagers: Natsuki Hayami, Masaki Miyamoto, Naozumi Yatsuka, Eri Kasugano, Seika Akishima and Eiji Horie. They're classmates from a Catholic school in Kobe, and they barely survive the Great Hanshin Earthquake

of 1995; five years later, during a school trip to Nagasaki, they get mysteriously transported... to the Amakusa region in the year 1637, shortly before the historical massacre of the Christian population.

Having been transported to different years within the same timeframe, the six youngsters first must reunite with each other and assess their current situation, as well as what has changed between them. And when they're done with it and gather their common knowledge of the future, they set out to exorcise their own inner demons as well as to prevent the carnage...