Crapsack Only by Comparison 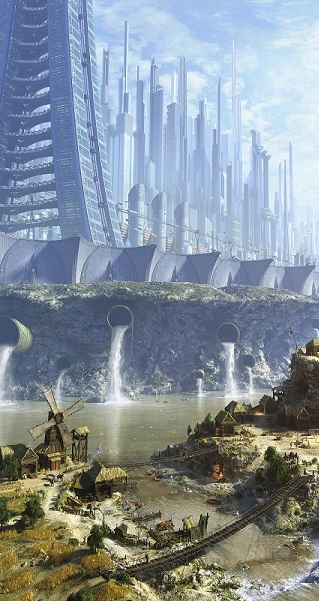 You know if you scroll down a little, it's really not too bad.note  Sourced from DeviantArt.

Ron Wizard: I had... bad pizza yesterday.
King Radical: There is... a lot of bad pizza in this land too.
Ron Wizard: WHY DID YOU BRING ME HERE YOU MONSTER!!!
— The Adventures of Dr. McNinja
Advertisement:

This world is actually quite okay, at least by standards that can be expected by the audience. However, it is very much a matter of perspective whether a certain world is a Crapsack World or a Utopia. And thus, sometimes a character or cast of characters are faced with a world that is awful for them without being particularly bad in itself.

These characters might come from a world where boredom, lies, poverty or even death itself simply doesn't exist. When they encounter a world just like ours (and a rather kind version of it at that), it looks horrifying in comparison. In some cases, they learn to appreciate this new world after a while. In others, they remain repulsed by it.

If the character is unbalanced enough, this could possibly lead to him wanting to Put Them All Out of My Misery.

Compare Appeal to Worse Problems, Humans Are the Real Monsters, Life Will Kill You, and Perfection Is Addictive. Deliberate Values Dissonance and Culture Clash are bound to come into play.

Needless to say, this is Truth in Television. In the modern world, it can be easy to forget that access electricity, plentiful food, clean drinking water, effective medical care, the internet, and innumerable other things simply weren't as widely available as they are today if they existed at all. And still are not widely available in many parts of the world. What the contemporary population saw as luxuries or opulence might be easily available in today's worldExample  Hundreds of years ago, spices and dyes used to be more valuable than gold. Nowadays you can find dozens of different spices at the local grocery store, and even the cheapest clothing can be dyed with colors like violet and indigo that were literally worth a king's ransom. if they're not looked down on as primitive or barbaricExample Medical care used to be very unpleasant, especially before the advent of modern anesthesia. In light of this, any real-life examples are simply redundant.