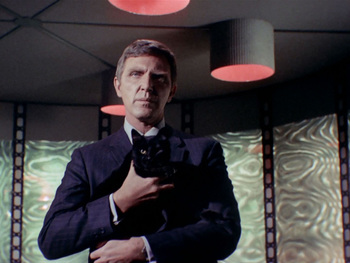 The mysterious Gary Seven (with Isis). So mysterious, in fact, that his TV show never even got made.
Advertisement:

The Enterprise goes back in time to visit the year 1968 to observe and report. Amazingly, they discover a transporter beam signal, something that didn't exist in 20th Century Earth. They intercept and beam aboard a humanoid called Gary Seven and his black cat, Isis. Mr. Seven soon escapes, sending a few Redshirts to la-la land. (No one dies in this ep. In fact, they all have blissful smiles on their faces as they're incapacitated.) As he beams down to Earth, Kirk and Spock follow to make sure he doesn't pollute the time stream since his excuse of being from a planet they never heard of and being there as an agent of protection seems far fetched.

Who is Gary Seven, and why is he so insistent on getting to McKinley Rocket Base?