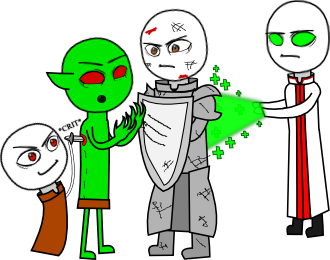 In Character Class Systems, there are many different roles, from petmasters to nukers to jacks of all trades. However, even outside class systems, three particular combat roles often come together, forming what in MMOs is dubbed "the holy trinity":

The grouping allows each player to have a clear role and helps emphasise team-based combat. Typically, if there are any duplicated roles it will be the damage dealer.

Often reliant on a simple "aggro" system, wherein the tank must keep the highest amount of "threat" in order to keep enemies focused on him — earlier games simply had foes go after whoever did the highest damage, rarely allowing a tank a place in combat, and earlier still featured them attacking mostly at random or just whoever they noticed first. Without this threat and aggro system, it becomes highly illogical for the Video Game A.I. to not just ignore the tank and attack the other two guys. Still, it is possible to work without it: the damagers/healers could be ranged, for instance, and the tank could just be blocking the path—indeed, this is how "tanking" works in more tactically-inclined games.

Sometimes, the different roles will also have bonus abilities tied in with them; the tank could be good at crowd control, the healer might be able to debuff enemies (thus becoming more of a general support role) or have special powers fighting the undead... The roles may also be toyed with, or merged slightly with hybrid classes — e.g. a tank with some support abilities (often a Paladin).

All roles are commonly found outside the dynamic in other party-based games. Has become a generally accepted standard in MMORPGs, to the point where some are deliberately defying it. As Adam Millard

points out, the holy trinity emerges from the three main types of player interactions in RPG combat: player attacks enemy (damager), enemy attacks player (tank), and player supports player (healer); therefore, the key to transcending it is to introduce meaningful player interactions with objects other than just enemies and other players in combat, such as manipulating the surrounding terrain or controlling the resource economy.

Sub-Trope of An Adventurer Is You, an overview of different classes not necessarily part of this dynamic and Three Approach System, where a game has three different gameplay types. White Mage/The Medic and Stone Wall are general character and gameplay archetypes, and may or may not be part of the dynamic. Compare Combat, Diplomacy, Stealth and Fighter, Mage, Thief, other trio configurations. Contrast Utility Party Member, who is defined by their role outside of combat.