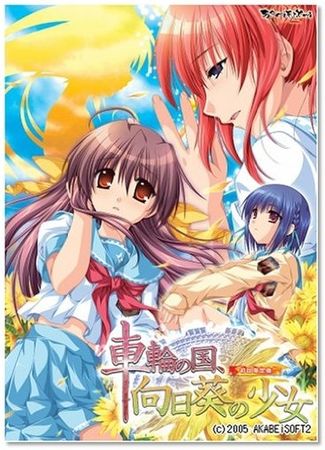 "People's paths through life are ultimately connected in the form of a ring."
Advertisement:

Sharin no Kuni, Himawari no Shoujo, roughly translated as Wheel Country, Sunflower Girl, is an eroge developed by Akabeisoft2.

The game takes place in a country where law is based upon deterrence and criminals are assigned "obligations" fitting for their crimes. If a criminal disobeys an obligation, they are sentenced to live their lives in a concentration camp, where most die before finishing their prison term.

Within this society, a man named Morita Kenichi aspires to the position of Special High Class Individual, one who holds authority over said criminals and is in charge of rehabilitating them to become productive members of society.

For the purpose of fulfilling his ambition, Kenichi returns to the hometown that has long since forgotten him.

To finish his training, he must rehabilitate three girls, two of which are childhood friends. All come with personal issues by the bucketload.

A fandisc has been released titled Sharin no Kuni, Yukyuu no Shounenshoujo, roughly translated as Wheel Country, Boys & Girls of Eternity, which includes all the epilogues for the heroines of the original game plus The Houzuki Chapter, which sheds light on Houzuki's own story & brings the original, almost Bolivian Army Ending to a close.