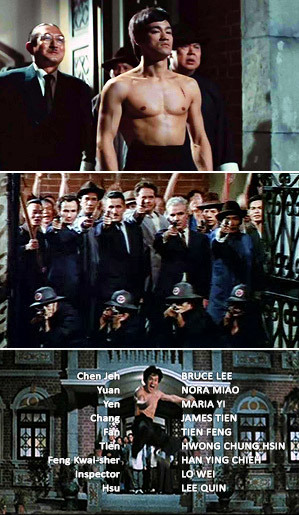 SPOILER ALERT: He was fine.
"For a moment there, I thought we were in trouble."
— Butch Cassidy's last words, Butch Cassidy and the Sundance Kid
Advertisement:

The trope is named for Butch Cassidy and the Sundance Kid.

This trope usually leaves out the actual demise of the protagonists, ending just as they face the fire. Thus, while previous circumstances and/or antagonists indicate their unseen yet inevitable destruction, the actual fate(s) of the hero(es) hide(s) behind the horizon evermore, unless the fiction continues this/these character(s) in an upcoming/additional body of work.

A variation, the Bolivian Army Cliffhanger, can be used in TV shows and other serial media to raise the audience's tension over which characters survive to the next season or installment. See Uncertain Doom for scenarios in which a character's fate is left hanging in the middle of a work, season or installment rather than at the end.

Can be considered a variation of a Downer Ending, although it's ambiguous enough to give the viewer/reader some hope. When the camera cuts to a different scene unrelated to the battle right before the work ends, this overlaps with Charge-into-Combat Cut. Arguably scarier is an Offscreen Inertia ending.

As some shows / films have ended on an unresolved Cliffhanger, it's worth noting the difference between the two. A cliffhanger is designed to create suspense and maintain the audience's attention so that they come back to continue the story. An unresolved cliffhanger, therefore, is an unintentionally suspenseful ending; the producers intended for the cliffhanger to be resolved, but outside events prevented this. The Bolivian Army Ending, however, is an intentional ending, and needs to work satisfactorily as such; while the exact details of what happened might be slightly ambiguous, it is often heavily implied what the outcome will be, and either way the audience is left under no illusions that the character's story is not over. The Trope Namer, for example, doesn't show the viewer the outcome of the two main characters confronting the Bolivian Army, but it is framed in such a way that the audience is left in little doubt what it will be regardless.

Ending Trope; Spoilers below will be unmarked.