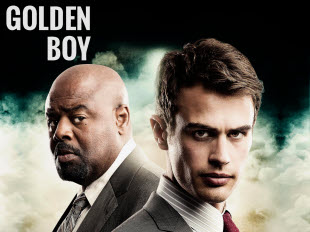 Golden Boy is a 2013 series airing in the US on CBS. It revolves around a young patrolman named Walter William Clark, Jr. (Theo James) who shoots a robber and saves his hostage in a highly publicized street incident. In the resulting publicity Walter is not only promoted to detective but gets his choice of assignment. Walter chooses homicide, becoming the least senior member of the squad by ten years. While he wants to be assigned to fellow hotshot Christian Arroyo (Kevin Alejandro) as a partner, his actual partner is the older and crustier Don Owen (Chi McBride). The series is in a way an extended flashback, as Walter reminisces seven years in the future from his position as New York's youngest ever police commissioner.

Golden Boy was cancelled after a single half-length season.

Not to be confused with manga of the same name, or with the Clifford Odets play and its adaptations.