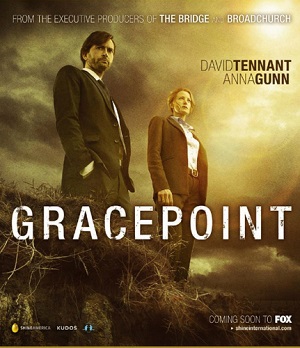 Gracepoint is a Detective Drama Miniseries airing on FOX. A remake of the acclaimed ITV series Broadchurch, it follows the same basic structure of the original, with the death of a young boy in a coastal tourist town sparking a police investigation that begins to uncover a great many unsavory secrets about the town's residents.

Unlike Broadchurch, the show didn't make it past one season, so we'll just have to imagine how it would have handled that show's rather controversial future storylines, particularly with its change in the ending.

Tropes Associated With This Show Include: