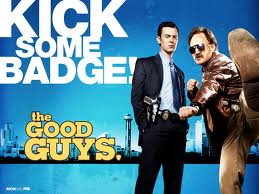 The Good Guys is a 2010 summer Buddy Cop Show starring Bradley Whitford and Colin Hanks, from the creator of Burn Notice. The Pilot aired as a sneak-peek on May 19th of that year, and the series began its first season on June 7. Unfortunately, the show struggled with low ratings via something of a cult audience, and was cancelled after one season

Dan Stark (Whitford) is a former brilliant detective who still works as if life were in The '80s, while Jack Bailey (Hanks) is his By-the-Book Cop partner. The show's tone is very much like Burn Notice, but unlike Burn Notice's, The Good Guys runs on distilled Rule of Cool. Over-the-top shootouts and car chases are a regular occurrence, and in general, the show's writers seem to plan the plot purely around what's fun.

Not related to the The '90s British show or 1968 Bob Denver sitcom of the same name.