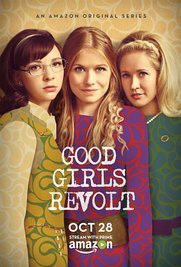 Good Girls Revolt is a 2016 Prime Video show based on the book 'The Good Girls Revolt' which is Based on a True Story.Set in 1969/70, times in America are a-changing – but not at News of the Week, where men are reporters and women are researchers. A group of women, led by Patti Robinson, a free spirit who wants to be a reporter, and Cindy Reston, unhappily married, who dreams of being a novelist but only has been allowed by her husband to stay at the magazine for a year before they start a family.

In the first episode, a new researcher, Nora Ephron, is hired and does things her own way, rewriting her reporter’s article and wanting credit for it, which gets her fired. This inspires Patti and Cindy, and some of the other girls, to think of new possibilities – equal pay, getting to write, getting bylines.

They eventually get a lawyer and plan to file a complaint with the EEOC, but gaining the support of a majority of their fellow researchers is difficult. Wick and Finn, the editors who struggle to work together to give the magazine a new direction, their reporters, who take them for granted, and researcher Jane, who is determined to play by the rules and get to write that way – all of them need to be carefully handled and kept in the dark in order for no one to get fired before the complaint is filed. However, Patti and Cindy won’t be kept down, even as the relationships in their lives deteriorate, they are caught in love triangles, and their campaign takes several hits along the way.