Is It Something You Eat? 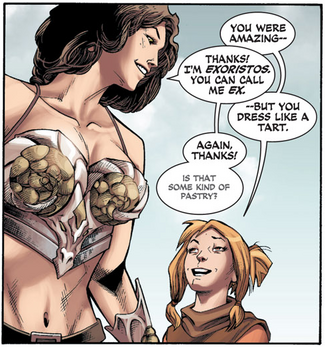 "What's estrogen? Can you eat it?"
— Female orc joke, World of Warcraft
Advertisement:

Stock line for an Idiot Hero, Big Eater or Extreme Omnivore. Usually used to convey how out of touch a character is with whatever they are asking to eat.

If someone's default reaction to a word they don't recognise is to take offence, see Calling Me a Logarithm. If it's to pretend they know the word, see I've Heard of That — What Is It?