Anime / Yo-kai Watch: Shadowside - The Return of the Oni King 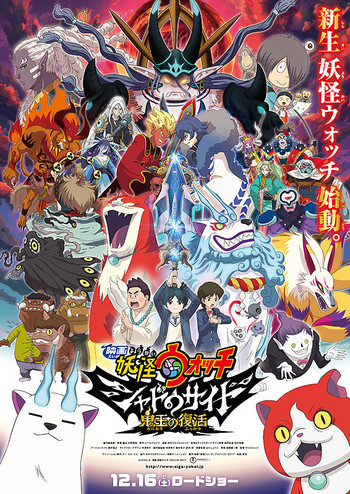 This isn't your older brother's Yo-Kai Watch!
Yo-kai Watch: Shadowside - The Return of the Oni King is the fourth film in the Yo-Kai Watch anime series. It came out in Japan on December 16, 2017. The film is also a crossover with the long-running youkai franchise GeGeGe no Kitarō.
Advertisement:

The story starts thirty years after the anime. As Nate grew up he found he could no longer see yo-kai. His yo-kai watch has since been buried between space and time. Everything was peaceful until thirty years afterwards a comet appeared in the sky. An evil yo-kai virus has spread that causes the people of Springdale to become malicious. Luckily, a few teenagers have been chosen as the owners of the newest yo-kai watches.

Yo-kai Watch: Shadowside - The Return of the Oni King boasts a darker, more serious tone and a different art-style from its predecessors, while still keeping Yo-Kai Watch's signature humour. Yo-Kai Watch 4 features the characters from the film.

The film has a spinoff anime in Yo-kai Watch: Shadowside.