Film / The Day the Earth Froze 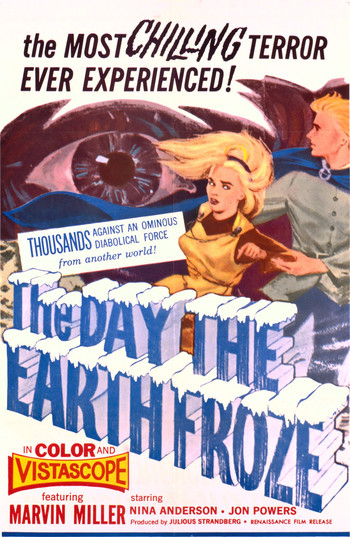 In the idyllic land of Kalevala, Finnish hero Lemminkäinen (Andris Oshin) woos the fair damsel Annikki (Eve Kivi), but Louhi (Anna Orochko), the evil witch of Pohjola, kidnaps Annikki in order to compel her brother Ilmarinen the blacksmith (Ivan Voronov) to build a Sampo (a magical mill that cranks out riches). Lemminkäinen and Ilmarinen travel to the witch's lair to rescue the maiden, but Louhi demands they complete several tasks, including the construction of a Sampo. After Ilmarinen builds the Sampo, he, Lemminkäinen, and Annikki leave. However, Lemminkäinen, upset at the idea that Kalevala will not reap the Sampo's riches, swims back to Pohjola, where he tries to seal the Sampo back from Louhi. The witch responds by unleashing the winds on the escaping Lemminkäinen's boat, sinking it and the Sampo with it.

When Lemminkäinen returns home, the shaman Väinämöinen (Urho Somersalmi) says even the fragment of the Sampo that survived will bring good luck, and Lemminkäinen and Annikki get married. But Lemminkäinen's attempt to steal the Sampo has angered Louhi, so she steals the sun, plunging the world into frozen darkness. Lemminkäinen's village bands together to bombard the witch with the music of sacred harps, which turns her to stone. Lemminkäinen releases the sun and everyone rejoices!

Loosely based on The Kalevala. The film was originally called Sampo and it was released in 1959. The film was produced as a Finnish/Soviet co-production and it was directed by famous Russian director of fantasy films, Aleksandr Ptushko (of The Magic Voyage of Sinbad and The Sword and the Dragon fame). It was filmed in Ukraine, Finland and Russia and starred actors from Finland and different parts of the Soviet Union. Each scene had to be shot four times, as it was dubbed in two languages (Russian and Finnish) and filmed in two aspect ratios (standard and anamorphic widescreen).