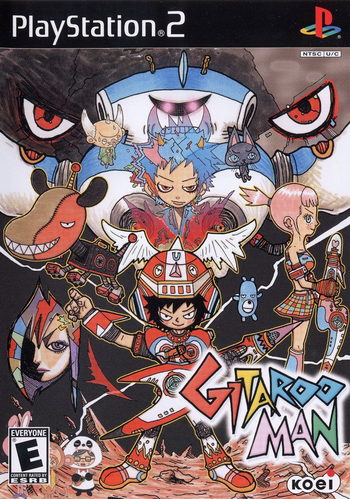 Gitaroo Man is a Music/Rhythm Action PlayStation 2 game developed by iNiS and published by Koei.

U-1 is a loser: his best and only friend is his talking dog, Puma; he can't get attention from his crush Pico to save his life; and rich, talented Kazuya takes every opportunity to pick on him. Fortunately for him, Puma reveals that he's the inheritor of a great legacy: he's the last descendant of Gitaroo Man's line, destined to battle evil and free his people by playing a magical Gitaroo. U-1 thus finds himself thrust into the conflict between the Gravillian oppressors and his enslaved people, and along the way, he falls in love, learns to to stand up on his own, and grows up.

Gameplay consists of a Charge Phase (following a curving line and tapping a button in sync with the circles that appear in the line to fill up U-1's vitality meter), a Battle Phase (same as the Charge Phase except you are damaging your opponent as well as pressing buttons to dodge the enemy's attacks), and a Final/Harmony Phase (when your enemy's health is low/critical, U-1 launches an extravagant solo attack that finishes the enemy off).

The game was given a PSP remake, Gitaroo Man Lives! which featured some new options such as a Jukebox mode as well as two new songs for multiplayer.