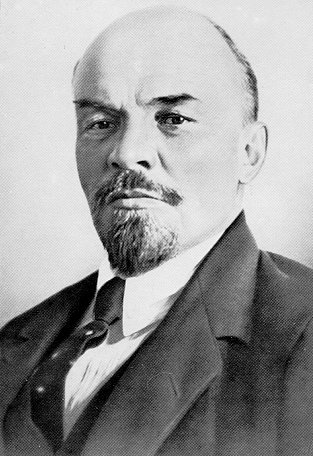 Sometimes, history just needs a little push.
"Lenin is not comparable to any revolutionary figure in history."
— Peter Kropotkin

Lenin (real name Vladimir Ilyich Ulyanov, 22 April 1870 [10 April in the Julian calendar] – 21 January 1924) was a Russian communist revolutionary, politician, and political theorist. He served as the ethnically-mixed leader of the Bolsheviks, known for his stylish goatee and powerful forehead. Born to a wealthy middle-class family in Simbirsk, he was, according to most accounts, actually relatively uninterested in politics until the day his brother was executed for participating in a failed plot to kill the Tsar. This changed Lenin's life, and he devoted his life to the revolutionary cause. The authorities did not tolerate his anti-monarchist activity and he soon ended up in jail, then in Siberia, before finally fleeing the country and ending up living in Switzerland. His chance would finally come in 1917, when the Germans, hoping he'd cause havoc (but not thinking he'd actually succeed) allowed him to return to Russia. During Red October, Lenin led the insurrection that toppled the weak, vacillating and unpopular Provisional Government that was formed after the February Revolution toppled Tsarist Russianote The Bolshevik party, which he led, was not merely a case of a lucky opportunist (though it certainly played a part). It was, even compared to other revolutionary, social-democratic and anarchist parties (even the most radical ones) an unusually well-structured and efficient organization, that filled the power vacuum of the Petrograd (St. Petersburg) capital swiftly and resolutely.. A large part of Lenin's popularity came from his slogan "Peace, Land, Bread", which had great appeal for a population devastated by years of war and privation.

He pulled Russia out of WWI and formed the world's first socialist state. This was not received well by many other rulers and governments, and a lot of people in Russia itself, which led to foreign intervention and the Russian Civil War. Most of Lenin's time as leader was spent at war. An assassination attempt resulted in his health deteriorating rapidly, until he was finally paralyzed by a series of strokes and forced to withdraw from politics. He died shortly after and was, against his wishes and that of his wife, mummified and interred in a mausoleum.

Lenin transformed Marxism, which led "orthodox" Marxists, such as Georgy Plekhanov, to denounce him. Lenin argued, pace Marx, that a communist revolution can take place in a feudal nation without the bourgeois revolution and industrialization that Marx argued were the Required Secondary Powers for the development of socialism, and later communism. Lenin justified this with his book, Imperialism: The Later Stage of Capitalism to explain that capitalism had advanced to a superior stage that Marx had not foreseen, in which capitalism could penetrate countries that had not made a bourgeois revolution and therefore created the conditions for a socialist revolution. As a revolutionary tactician, Lenin argued for the creation of a vanguard of professional revolutionaries to organize and lead the events, and his insistence on committed revolutionaries to serve in the vanguard rather than form coalitions led to the split between the Bolsheviks and Mensheviks, both terms that he invented. As a revolutionary strategist, his utopian dream saw the Russian Revolution as a detonator for global movements; Red October would trigger a revolutionary wave in developed nations. But the suppression of the Bavarian Republic, and the devastation of the Russian Civil War halted this strategy. After the Civil War, Lenin introduced the New Economic Policy which allowed market forces to resume in the Soviet Union and became the first attempt at a mixed economy.

His social policies included considerable rights for Russia's minorities and an organized campaign to stamp out anti-semitism in the Soviet Union, which was the most extensive anti-racist policy ever mounted in Russia.note According to Jewish historian Zvi Gitelman: "Never before in Russian history - and never subsequently has a government made such an effort to uproot and stamp out anti-semitism" He supported minority religions such as Russian Muslims and also promoted a policy of affirmative actions in the aim of undoing the forced Russifications of regional cultures in the former empire and he supported the maintenance of national cultures across the Soviet Union. Internationally, he favored Communist engagement with democratic processes in developed nations and castigated the German Communist Party for not participating in Parliamentary elections. He also recommended British communists to ally with the Labour Party, backing away from his no-coalitions with wishy-washy-liberals philosophy.

On the other hand, Lenin emphasized the need for violence and terror to overthrow the old order, which resulted in the Red Terror. Many, many people were tortured and executed without proper trial, sent to labor camps, imprisoned or forcibly deported. In 1918, he passed the Decree on the Separation of Church and State, depriving many churches of their rights, and allowing for the seizure of their property. Clergy members and laypeople alike who resisted were arrested or killed.

Partly because Lenin spent a good deal of his life outside Russia as an exile and a revolutionary, he stood slightly apart from Russia's traditional ways of operating, which was via an informal network of patronage, friendship and emotion-driven cliques that existed in Tsarist Russia and was still the way many in Russia and the former Russian Empire related to each other. This played a crucial part in the rise of Lenin's eventual successor. General Secretary of the Communist Party Joseph Stalin was a man of an entirely different disposition than Lenin: crude where Lenin was cultured, provincial where Lenin was cosmopolitan, and where Lenin insisted on professionalisation and merit-based leadership, Stalin was more keyed to the informal clique style of Russian bureaucracy.note via long experiences in the underground of the Empire, in local seminaries and prisons, where Lenin had a lengthy international exile and only a brief exile in Russian prison and besides that grew up in a family of middle-class professionals and studied in university Lenin's insistence on professional discipline and maintenance of The Chains of Commanding meant that he was also reluctant to openly nominate a successor based on his preferences. 'Real' contenders for the leadership such as Kamyenev and Leon Trotsky were all critiqued by him, who rightly trusted that his thoughts on his successors would have a great influence on the election. His oncoming dementia which left him bedridden and bound at his Dacha (Partly because of the assassination and partly because he was a Workaholic) prevented him from being too involved with the Politburo's hidden factionalism. Like the rest of the top leadership, Lenin had disapproved of Stalin's vulgar, uncouth, and uncultured naturenote Lenin took great personal offence when Stalin said something to the effect of 'Shitting in the same toilet as Lenin doesn't make his wife a politician!', and Lenin tried to get Stalin demoted for it. Stalin's supporters argued that Stalin had been very rude, but nobody thought that it would constitute a sound reason for removing such a competent manager but recognized the merit of his diligence and managerial competence all the same. Stalin used his position as secretary to develop a network of connections and patronage, and he successfully used Lenin's vague approval of his managerial abilities and specific criticisms of the other candidates to help win the election. Lenin's wife, Nadezhda Krupskaya, came to approve of Stalin's nomination and criticized Trotsky, Kamenev and the Left Opposition in later debates while supporting Bukharin at the same time.

Lenin led a rather spartan life and was against any sort of Personality Cult being formed around him, though eventually he, reluctantly, did submit to posing for photographs intended for mass market use. Upon his death, the Politburo intended to honor his wishes to bury him in Petrograd. When they laid his body in state for public display however, an overwhelming number of people showed up to see him and this eventually led to the creation of ad-hoc measures to meet the growing number of visitors, leading finally to the decision under a committee overseen by Felix Dzherzhinsky to mummify and preserve his body in a Russian constructivist mausoleum. In the opinion of later observers, Lenin in effect became a modern secular Orthodox saint whose organic relics possessed holy qualities, and on the anniversary military parade on Victory Day and the October Revolution, senior members of the Politburo would literally stand on the tomb. Upon his death, Lenin's image as Our Founder became a tool for legitimacy for the Communist Party, giving them continuity with other founding figures (such as Peter the Great, hence the renaming of Petrograd to Leningrad five days after Lenin's death, which lasted till the end of the Cold War). He was a prolific author, and his collected works consist of more than 40 volumes, each one a Door Stopper.note The most famous works include What is to be Done?, Imperialism, the Highest Stage of Capitalism, The State and Revolution and the April Theses. For those interested in learning more about Lenin's political ideas, the basics can be found here

. His books on imperialism made him an inspiration for anti-colonialist movements and he was admired by the Western intelligentsia as a serious intellectual. As a result of the Cold War, he has been overshadowed by his successors, and in media he usually doesn't appear personally; instead, one can often see his image on statues, posters, banners etc, in just about any communist setting.

Critics argued that there was continuity between Lenin and Stalin's policies, but the fact remains that of all of Russia's leaders, Lenin held office for the shortest time than any head of state of the Russian Empire, Soviet Union and the Russian Federation, and his involvement with the government he built was far shorter than that of other revolutionary founders such as Fidel Castro and Mao Zedong. His international reputation is strongest in post-colonial nations in Africa, South America and Asia, where he's still seen and admired as a heroic figure who modernized Russia and succeeded in transforming his country. It's possible to draw quite a few parallels between Lenin and Maximilien Robespierre, though Lenin, while he respected Robespierre considered Danton his true favorite of the French Revolutionaries. The principal difference aside from culture, time, place and agenote Robespierre and Danton were in their mid-30s when they died, Lenin was in his late-40s when he took power and 54 when he died, is that the French Revolutionaries were mere nobodies who found careers within a spontaneous event they did not predict, rarely controlled and finally lost direction (and their heads). In contrast, Lenin was a professional revolutionary who dreamed, planned and achieved his vision through intelligence, passionate and lifelong devotion, iron will, unshakeable and dogmatic conviction in the righteousness of his cause, and a charisma that inspired many others to his ideals, and left behind a government that, for better and worse, lasted 74 years and decisively shaped the 20th Century.