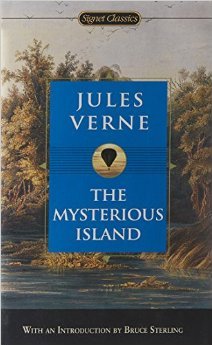 The Mysterious Island (or L'Île Mystérieuse, if you want to use the original French title) is a novel by Jules Verne. Originally published in 1874, the book is essentially a castaway story. During the American Civil War, five prisoners, and their dog companion escape a Confederate prison in a balloon. Unfortunately, a storm blows them off course and they end up on a deserted island, which they are forced to make their new home. This being a Verne story, our heroes are far too industrious to merely survive. Over the course of the book, they tame the island and reconstruct the civilization they left behind. They become quite content in their new home, but never enough to abandon their ultimate quest to re-establish contact with the rest of the world.
Advertisement:

If this sounds familiar, that's because it's based on Alexander Selkirk, whose life-story had already served as the basis for Robinson Crusoe and The Swiss Family Robinson. Possibly as a way to distinguish itself from the other two books, Verne's yarn adds a mystery sub-plot. Someone or something is watching over the castaways; apparently aiding them at times, but whether their ultimate objective in doing so is for good or ill remains unclear for much of the book.

It was adapted into film as Mysterious Island in 1961, and featured Herbert Lom (Chief Inspector Dreyfus from The Pink Panther films) as Captain Nemo. While (mostly) faithful, there was a lot of Adaptation Expansion with the addition of numerous gigantic creatures on the island, brought to life courtesy of special effects maestro Ray Harryhausen. It was adapted into television by the CBC in 1995.

The novel was adapted twice for French TV 10 years apart: a two-part TV movie in 1963 and 6-episode miniseries in 1973, featuring Omar Sharif as Captain Nemo, and Jess Hahn as Pencroff. The 1973 series was quite faithful to the original novel, after Verne had changed Nemo from a Pole to an Indian exile. Footage from the series was edited into a feature film that was released in French theatres later in 1973.

In 2004, Kheops Studio produced Return to Mysterious Island, a distant sequel about an original character discovering the ruins of the Nautilus.

Fun fact: While this isn't the most famous of Verne's works, it has the distinction of having inspired two major franchises: Myst and Lost. It was also loosely adapted into the sequel to the 2008 film version of Journey to the Center of the Earth, as Journey 2 The Mysterious Island.

Copyright has expired on this book, and it's available on Project Gutenberg here

. If you own a Kindle, it's also available as a free download from Amazon.