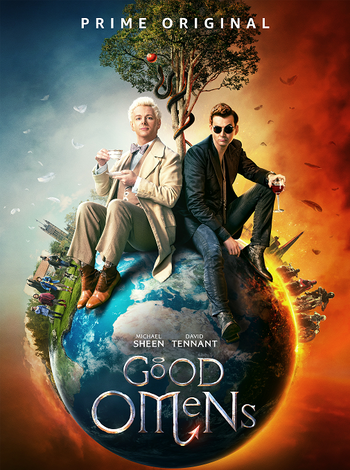 Welcome to the End Times.
Aziraphale: We have nothing whatsoever in common! I don't even like you!
Crowley: You do.
Advertisement:

Based on the book of the same name, Good Omens is a six-episode miniseries that was first released onto Amazon Prime Video on May 31, 2019, with the series airing eight months later on BBC Two in the United Kingdom.

Aziraphale (Michael Sheen) was the angel who guarded the gates of Eden, while Crowley (David Tennant) was the snake who tempted Adam and Eve. Following humanity's expulsion from the garden, the two are stationed on Earth as agents of heaven and hell. Six thousand years of living among humanity later, they are informed that it is time to start the Apocalypse. The problem is, they've both decided that they rather like Earth the way it is and hatch a plan to put off Armageddon as long as possible. Some Satanic nuns, two coincidental births, and entirely too much winking later, they realize they've lost track of the Antichrist, who is unknowingly about to end the world...

The show won the Hugo Award for Best Dramatic Presentation (Long Form) in 2020, making it the late Terry Pratchett's first Hugo. Neil Gaiman gave an emotional acceptance speech, saying Terry never thought he'd win one because they wouldn't give a Hugo to anything funny.

In June 2021, the miniseries was renewed for a second six episode season

, titled Good Omens 2, with Tennant and Sheen reprising their roles.

, Gaiman revealed that many years ago he and Terry Pratchett had actually plotted out the sequel (elements of which - most notably the angels - were used in the first season), and added "[there] are so many questions people have asked about what happened next (and also, what happened before) to our favourite Angel and Demon. Here are, perhaps, some of the answers you've been hoping for. As Good Omens continues, we will be back in Soho, and all through time and space, solving a mystery which starts with one of the angels wandering through a Soho street market with no memory of who they might be, on their way to Aziraphale's bookshop. (Although our story actually begins about five minutes before anyone had got around to saying 'Let there be Light'.)"

David Tennant commented saying how excited he was to work with Michael Sheen again, while Sheen said while personally he was against the idea of a second season, "the world isn't just going to save itself, is it? If David and I can manage to not fall out too badly this time, it may even have a chance of getting finished."

Gaiman has stated he has plans for a third season "if Amazon lets him," that would conclude the story.

open/close all folders
# to K
L to Z
"To the world!"
Feedback