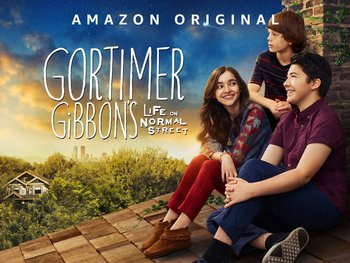 Three best friends. One very strange block.
"I've lived my whole life on Normal Street. It has a lake at one end and a forest of shady trees at the other. But what lies in between is anything but normal."
— Gortimer Gibbon's foreword before each episode
Advertisement:

The series is heavily based on Magic Realism. Weird things happen on Normal Street all the time and no one bats an eye. Episodes are usually standalone, and plots range from the more realistic (i.e. a quest to find a rare flower) to the downright absurd (i.e. time travel, cloning, interdimensional transporters, superheroes). Just go with it.

Gortimer vs. the Tropes: