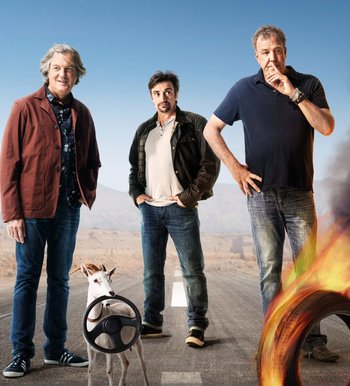 from left: James May, Richard Hammond, and Jeremy Clarkson. They had a show about cars on The BBC. They now have another one on a new network.
"...back in the spring [of 2015], as you probably remember, I suddenly became... unbusy."
— Jeremy Clarkson, Amazon FireTV ad

The Grand Tour is a motoring show on Prime Video that debuted on November 17, 2016. Amazon picked up the show initially for 36 episodes, spread across three seasons. New episodes debut weekly

, instead of a whole season released at-once available for "binging", like many other streaming shows.

The show is hosted by Jeremy Clarkson, Richard Hammond, and James May, who were the presenters of the second iteration of The BBC programme Top Gear that ran from 2002-2015. Their Vitriolic Best Buds rapport, along with their combination of car knowledge and absurd antics, turned that show into a global phenomenon, and Amazon has captured a similar flavor with The Grand Tour. The show is co-produced by the presenters, along with former Top Gear producer Andy Wilman.

Episodes feature segments ranging from semi-serious car reviews, many extravagant stunts, and some difficult trips, all filmed in various places around the world. The presenters introduce and discuss each episode from inside a giant tent

in the Cotswolds in front of a large audience note For the first season, the tent also moved from place to place, starting in South Africa and ending in Dubai, but due to costs and the presenters' health

, it was given a permanent home. They also engage in segments such as "Conversation Street" where they discuss current events in motoring, and "Celebrity Face Off", where two celebrities from the same field race around the same track, trying to be the fastest. There is also a test track in a top secret location note Actually, near Swindon, if you're interested that happens to be shaped like the Ebola virus, and so has been dubbed the Eboladrome, where they test out various cars and send them around a timed lap with a test driver. For the first season, they used NASCAR driver Mike Skinner (billed as The American) to perform test laps; for the second, Skinner was replaced by British GT driver Abbie Eaton.

website. Wilman expressed an interest in licensing or syndicating the show for broadcast, outside of Internet streaming, so it can eventually be seen by as many viewers as possible — and in October, 2017, the first season started broadcasting on Australia's Channel Seven, the show's first appearance outside of Amazon.

The run-up to the series, considering the history of the presenters' time at Top Gear, and of the circumstances that led to its creation, made for considerable coverage on social media and in the UK press. To make a very long and controversial story short, Jeremy Clarkson's contract for Top Gear was not renewed in March 2015 after a physical altercation with one of the show's producers. A few weeks later, May, Hammond, and Wilman opted not to renew their contracts for the show, and so subsequently left with Clarkson after the end of the show's 22nd series.

The four then began looking for an outlet to begin again with a new show; A deal was eventually struck between Amazon Studios and the quartet's new production company, "W. Chump & Sons" note The "W" is for Wilman, and "Chump" contains the first initials of Clarkson, Hammond, and May, respectively. and they were offered a generous amount of money (said to be in the neighborhood of $250 million) to make three seasons of (at the time) their still-unnamed show. After a long, long period of comical Internet bickering, fan debate, and serious legal wrangling, the show was christened The Grand Tour in May 2016.

As part of the show's global tone, and also due to the larger budget afforded them, the series travels around the world and to (arguably) more far-flung locations than in comparison with Top Gear. The first tent setup and subsequent audience filming was in Johannesburg, South Africa on July 17, 2016, with the final audience segments taped for the last episode of the first season were recorded in Dubai, UAE on December 10, 2016.

Filming started on the 2nd season not soon after the 1st season wrapped note in fact, a segment for Season 2 that takes place in Dubai was was filmed the same time they were there to do the last audience taping for Season 1 The filming had its share of peril — Richard Hammond was involved in two accidents: a motorcycle accident in Mozambique in March, 2017, and a crash in a supercar in Switzerland in June that was far more serious, but from fortunately he escaped with only a fractured knee and has since recovered. Audience tapings for the second seasons' 11 episodes began on October 25, 2017, and episodes began streaming December 8, 2017. The final taping for Season 2 wrapped on December 19, 2017.

Filming for Season 3 occurred through 2018, visiting locations like China, France, and Sweden. Audience taping for it began on October 30, 2018 and it began streaming on January 18, 2019, with the last episode streaming April 12, 2019. Amazon Game Studios (co-developing with Heavy Iron Studios) also released an Xbox and PlayStation 4 game based on the series, including tracks based on locations of the first two series (along with the Eboladrome track) with new DLC arriving after each Season 3 episode until the season was complete.

On December 13, 2018, Amazon announced that it would indeed pick the season up for a fourth season. However, Season 4 would ditch audience segments (and its signature tent) entirely, and going forward be comprised only of long-form episodes in the style of the single-trip "Specials" like the ones filmed in Namibia, Columbia, and Mongolia. The first, The Grand Tour Presents: Seamen, featuring a boating trip through the Mekong Delta, starting in Cambodia and ending in Vietnam, premiered on December 13th, 2019.

In an odd twist of fate, in was announced in 2019 that Wilman and the presenters were folding W. Chump & Sons and moving production of future episodes of The Grand Tour to Expectation

, a production company backed by their former employers, the BBC.

Details on new episodes have been sketchy, as all three presenters now have their own individual series in co-production with Amazon (in the case of Hammond & May, more than one), and the COVID-19 Pandemic has made international travel infeasible — Andy Wilman in fact came down with COVID

in late spring of 2020, derailing plans to film in Russia for a future episode. So far, Wilman will confirm

only two Season 4 episodes have been shot, the Seaman special, and a second filmed in Madagascar expected to premiere in September 2020, the editing of which was delayed due to Wilman's illness. Any future episodes are now effectively on hold.

"And on that terrible disappointment, it is time to end. Thank you so much for watching. Good night!"
Feedback

James May attempts to kill Jeremy Clarkson (And cause a groundhog day loop) by shooting him but he misses all his shots.

James May attempts to kill Jeremy Clarkson (And cause a groundhog day loop) by shooting him but he misses all his shots.