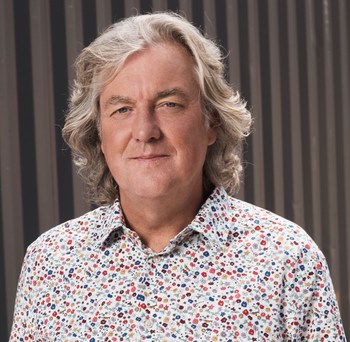 Captain Slow in one of his flowery shirts.
James Daniel May (born 16 January 1963) is a British TV presenter and journalist, best known for presenting Top Gear with Jeremy Clarkson and Richard Hammond between 2003 and 2015, subsequently moving to The Grand Tour with those two. He has presented other TV programmes on themes including science and technology, toys, wine culture and the plight of manliness in modern times. Between 2003 and 2011, he wrote a weekly column for the motoring section of the Daily Telegraph.

Over the course of his time on Top Gear, May self-Flanderized to some extent, becoming more slow and cerebral (and becoming worse in terms of his sense of direction, or lack thereof) in response to Clarkson becoming more aggressively boorish and Hammond becoming more hyperactive. Despite the "Captain Slow" nickname, May has in fact carried out some very high-speed driving; in 2007 he took a Bugatti Veyron to its top speed of 253 mph (407 km/h), and three years later he topped this by achieving 259 mph (417 km/h) in the Veyron's newer Super Sport edition.