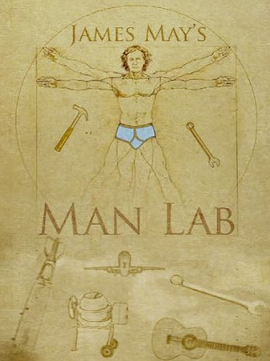 As you'd expect, he's done this properly.
"Hello, and welcome to Man Lab, where the callused hand of the reconstructed male tugs resolutely at the starting handle of the chainsaw of achievement."
Advertisement:

James May is a man on a mission.

Tired of seeing men portrayed as bumbling and useless, and fearful that mankind is losing the skills that made it so great in the first place, the Top Gear host takes on several varied tasks each episode, demonstrating everything from simple but useful skills to creative solutions for everyday problems to just plain odd ideas. Creating with hand tools, social skills, and eccentric inventions are all tackled with equal enthusiasm and occasional confusion. Sometimes, there is great triumph, while other times there is the indignity of defeat. Often, there is hilarity, and there's even the chance you might actually learn something.

The show debuted in October 2010 and has had three short series, plus a Christmas Episode.

bluff their way through this trope at a wine tasting. (It wasn't.)