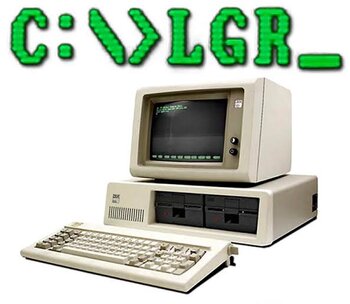 "This is a floppy disk. If seeing one of these gets you excited, then have I got a treat for you! LGR: commentary, history and snark on retro computer games and more! Floppy disks, big box PC games, odd hardware and software, The Sims series, stories of tech history, first-person thrift-shopping, and Let's Plays on games that make no sense!"''
— Old channel trailer
Advertisement:

Lazy Game Reviews, most commonly known by its abbreviation LGR, is an online video game review show by Clint Basinger (no relation to Kim Basinger) reviewing games mostly for PC, Amiga, Commodore 64, ZX Spectrum and Apple Macintosh, as well as reviews of The Sims series. Despite the title, reviews are actually extremely extensive and detailed.

The channel is divided into several shows:

He also has a food channel known as LGR Foods

, and a channel for extra, miscellaneous videos known as LGR Blerbs