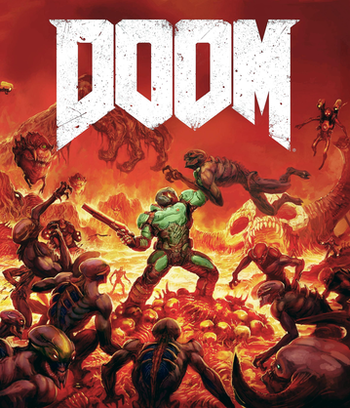 Fight Like Hell.
"They are rage, brutal, without mercy.
But you. You will be worse.
Rip and tear, until it is done."
Advertisement:

Doom (stylized as DOOM) is the fifth main installment in the Doom franchise, developed by id Software and published by Bethesda for the PC, PlayStation 4, and Xbox One on May 13, 2016. It was ported to the Nintendo Switch on November 10, 2017.

You play as a silent, unnamed Space Marine who wakes up naked in a creepy stone coffin surrounded by zombies. After slaughtering them and acquiring a suit of Powered Armor from an equally-creepy sarcophagus, you discover you're inside a Union Aerospace Corporation facility on Mars in the middle of a demonic invasion.

What were you doing in a coffin? Irrelevant. Why are demons invading Mars? Who cares. You're a berserker-packin' man and a half who's here to Shoot Everything That Moves until The Legions of Hell are obliterated.

Rip and tear, until it is done.

Originally announced in 2008 as Doom 4, the game was designed to be a Genre Throwback to the early days of First Person Shooters — back when guns didn't need reloading, cover was for cowards, players could carry more than two guns at once, and levels were more than just linear hallways interrupted by quick-time events. Having said that, it does preserve a number of features from modern FPS titles: Gun Accessories that provide Secondary Fire modes, having grenades and Pistol Whip assigned to their own buttons (a la Halo), melee-range "Glory Kill" Finishing Moves that allow you to (gratifyingly) beat foes to death with their own limbs and (gratifyingly) collect extra health and ammo pickups from their disfigured corpses, and some Info Dumps hidden in the Encyclopedia Exposita. The game also features competitive multiplayer, where up to twelve players duke it out in a variety of game modes, and a Level Editor called SnapMap, which allows one to create their own map with custom game logic.