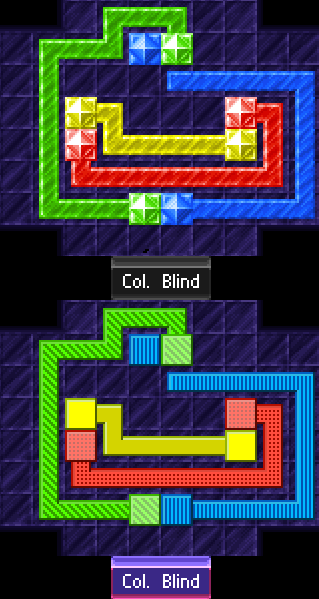 Not every single person on the planet can see every color in the visible spectrum, or at least, not properly. This is known as Color Blindness, and it comes in many flavors. Some have protanopia,note the inability to distinguish between colors in the green-yellow-red spectrum deuteranopia,note similar problems to protanopes, but without the abnormal dimming tritanopia,note seeing short-wavelength colors (blue, indigo and a spectral violet) as greenish and drastically dimmed, plus yellow is indistinguishable from pink, and purple colors are perceived as various shades of red or the rarest of them all, monochromacy.note seeing everything as black, white, or gray

To make games with color elements accessible to a wider audience, developers may implement a colorblind mode into their game via the settings (though even players with ordinary vision can freely select the option if they think it makes the game look better for them). It may affect either the entire screen's color palette, only the most vital parts of a game, or the game could add in symbols or patterns to its objects.

As you may expect, this trope is most commonly found in puzzle games that rely on colored objects, or games with Color-Coded Multiplayer that require you to know the color of what you're looking at, like distinguishing between abilities and team colors. Modern games studios started to commonly add color blind modes into their games in The New '10s and beyond, simply for the sake of accessibility, even if the game didn't really require such an option to make the game playable for those folks. In older games (even as late as The '90s), such a mode was sometimes implemented not with colorblind players in mind, but rather for players who didn't have color displays.

A very easy, and by far the most common way, that developers implement a color blind mode into a game is by overlaying a color filter preset on top of the game, which shows only specific colors to simulate different types of color blindness. The advantage of this is that it's good enough at replicating different colors for specific types of color blindness to get the job done, but the disadvantage is that color filters don't always work as expected, with certain colors still seeping through on occasion that could confuse color blind folks.

This also has the weighty advantage of game developers not having to manually adjust the colors for every part of the game. Part of the reason why modern 3D Games avoid recoloring the texture for color blind players is at least in part motivated by keeping the collective file size of a game down. In general, most 3D models in a given game have at least 3 textures associated to them; The Diffuse Map (that's the color and pattern you see) a Normal Map* or a Bump Map, the terms are basically interchangeable at this point, though there is a difference; bump maps are greyscale, instead of using the RGB spectrum (adds finer detailing to a model without modelling), and the Reflection Map (controls the reflection strength, go figure). A fair amount of games go even further to include other textures that control other functions (Occlusion maps, Specular Maps, Emissive Maps etc.), so as you might imagine, taken all together, any given model is gonna look pretty large if you also start to add six separate colored textures, which would lead to absurd file sizes for each model,* In general, 1K textures (1024) will be less than 512kb, 2K textures (2048) are about 2MB, 4K textures (4096) are often 16MB which is just unfeasible as a solution for most developers to add, not to mention the time taken to make and bake these colorblind oriented textures to begin with. In 3D games at least, color filters are here to stay.

When it comes to 2D games, like ones that use old 16-bit sprites, the filesize issue is basically a non-issue, as those sorts of games rely on sprite sheets that are significantly smaller. Not to mention the nature of these games means there are less textures to begin with, as level usually repeat the same tiles again and again. Another solution is to simply do in-engine color picking to a sprite sheet, as sprites of this nature lack complex shading, so they can change the color to a different hue in-engine.