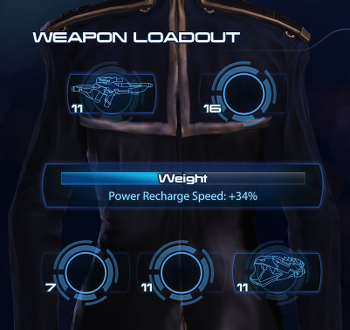 So many guns, so little room.
A form of Player Inventory.
Advertisement:

Some games let the player carry an impossibly huge array of weapons. Not these games. When this trope is in effect, the player character is stuck with just a certain fraction of the total amount of firepower in the game at any one time. If you want another option, you'll have to trade in one of your weapons to get ahold of it. Very popular in modern titles compared to the Hyperspace Arsenal days of Doom. A common modern variant will limit the player to just two main weapons at any time as popularized in Halo: Combat Evolved.

RPG games will sometimes allow the player to queue up a few preset selections of items from their inventory to be swapped through on the fly. For this, see Real-Time Weapon Change. For RPGs where the player can't carry every single weapon in the game, but their bulging pack of death dealing devices still approaches Hyperspace Arsenal levels, see Inventory Management Puzzle. Frequently a cause of Throw-Away Guns. Often a way of mixing up the Sorting Algorithm of Weapon Effectiveness. Compare Mutually Exclusive Power Ups and Limited Move Arsenal.