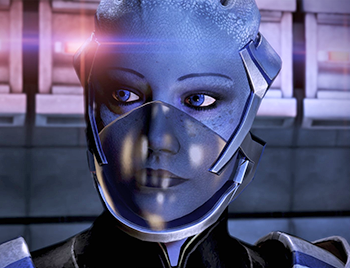 Normally, to survive in space outside of a sealed spaceship you need a bulky full-body space suit. Not necessarily the case in TV land. Earlier audiences might be expected to know that there's nothing to breathe in space, but before Explosive Decompression became a common trope writers might have supposed they could get away with putting a scuba mask on their characters.

Needless to say, in real life, an oxygen mask alone is nowhere near sufficient to protect someone from space. Decompression may not be as dramatic as it often appears in Hollywood, but it's still not pretty, and probably not survivable for extended periods. This is because spacesuits need to keep our bodies under enough air pressure for our bodily fluids like blood to remain in a liquid state. Once we pass the "Armstrong Limit

" (a point where air pressure is low enough for water to boil at human body temperature), unprotected spacewalks will become fatal in 60-90 seconds. In addition, space is full of deadly radiation from solar winds and cosmic rays, and exposing your body to that will cause serious radiation illnesses and cancer.

Alternatively, putting a simple mask over one's mouth and nose while retaining the rest of the character's normal costume might make them easier to recognize, compared to a full-body spacesuit. Or they might need to conserve assets for a CGI work.

May be justified in-story by Bizarre Alien Biology or some sort of Applied Phlebotinum.

See Batman Can Breathe in Space for when you don't even need an air supply. May take the form of a Fishbowl Helmet. Compare Latex Space Suit for another form of minimalistic space wear. Not to be confused with Space Suits Are Scuba Gear, which is when a full-body space suit has vulnerable external air hoses.